February 23, 1964 - NASCAR Daytona 500. Racing champions from several types of motor racing entered the 1964 Daytona 500 to form
a lineup that NASCAR.com calls "The greatest field in NASCAR history". This was Dave MacDonald's first and only Daytona 500 prior
to his death in the 1964 Indianapolis 500 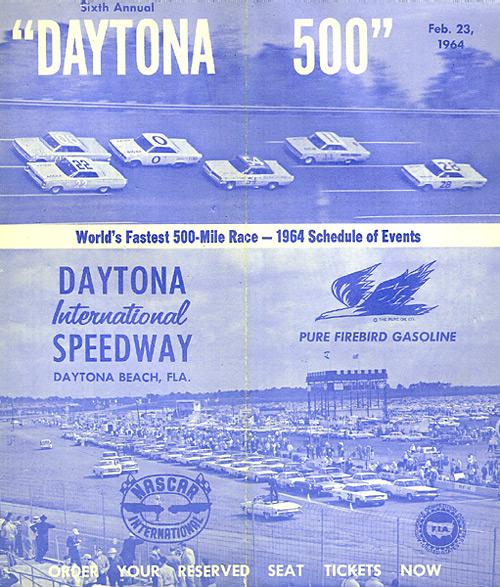 At this time, Dave MacDonald was still running a full schedule for Shelby driving the Cobra Roadster, King Cobra & Daytona Cobra Coupe.
Dave managed to squeeze in two NASCAR races early in the '64 season (both on road courses) and despite limited time on the circuit was
7th in the NASCAR driver standings coming into the Daytona 500. This would be Dave's first time running on a pure oval track! 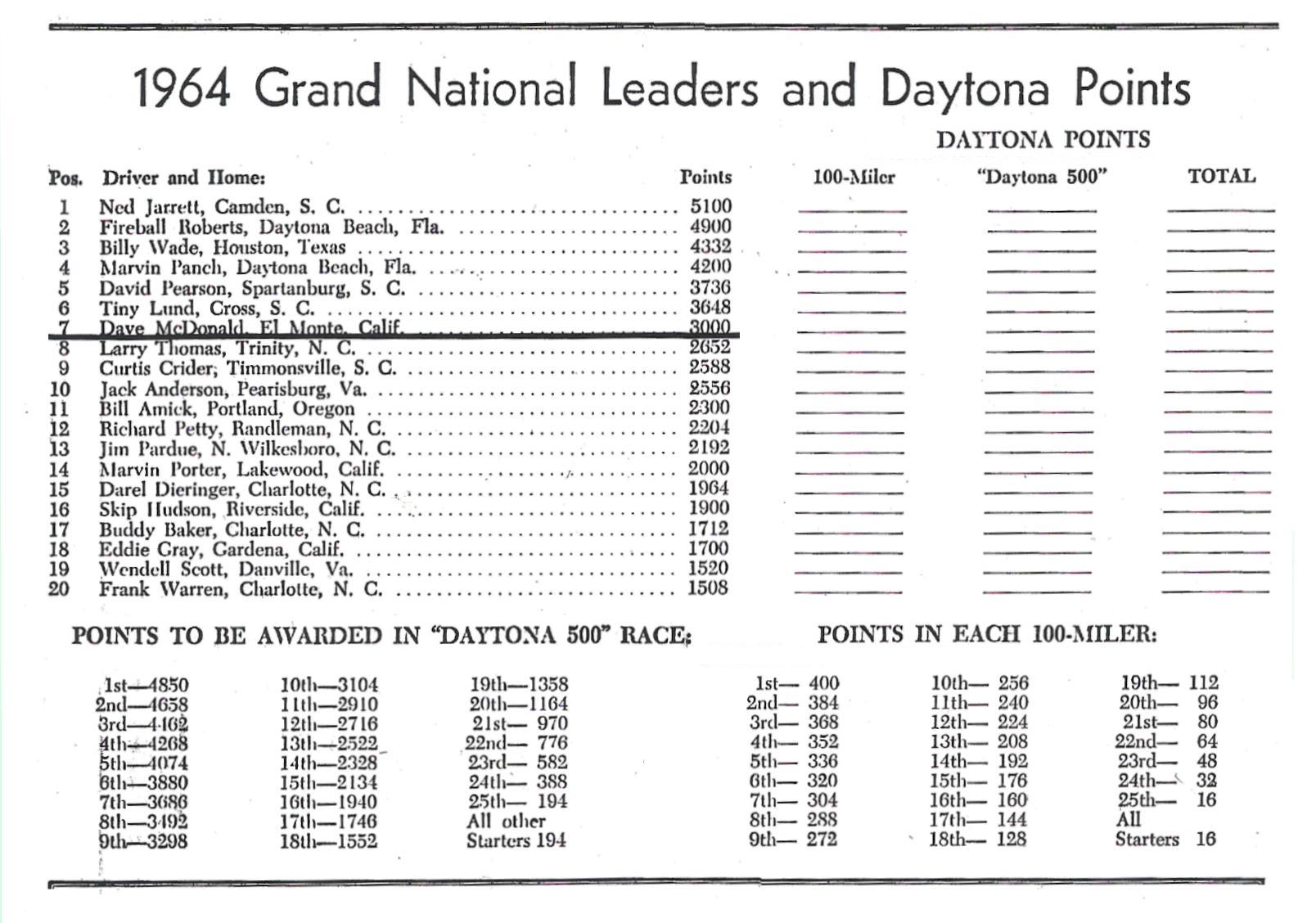 Daytona rookie Dave MacDonald in his first (and only) Daytona 500. 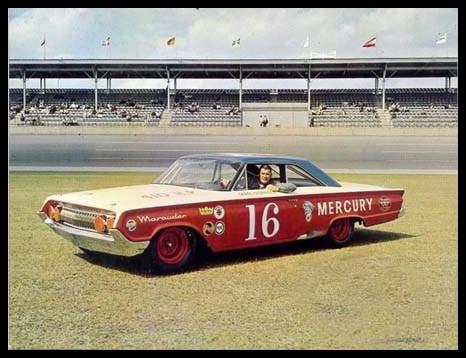 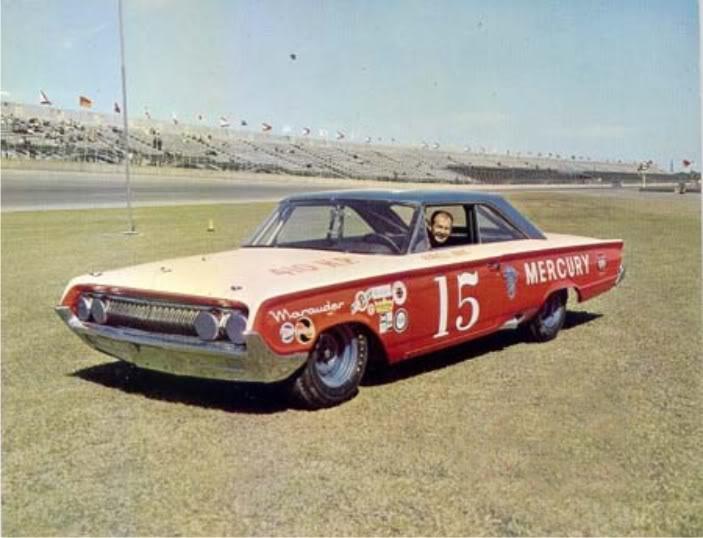 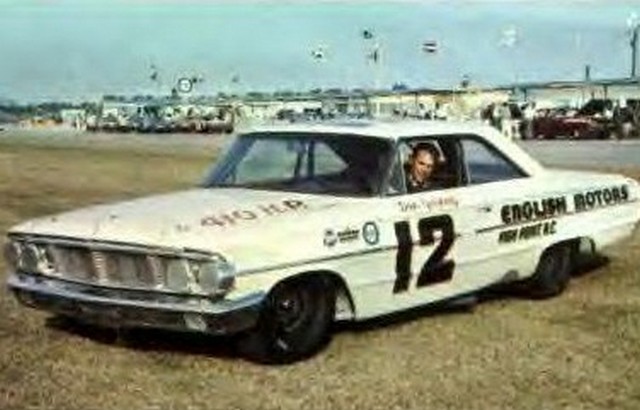 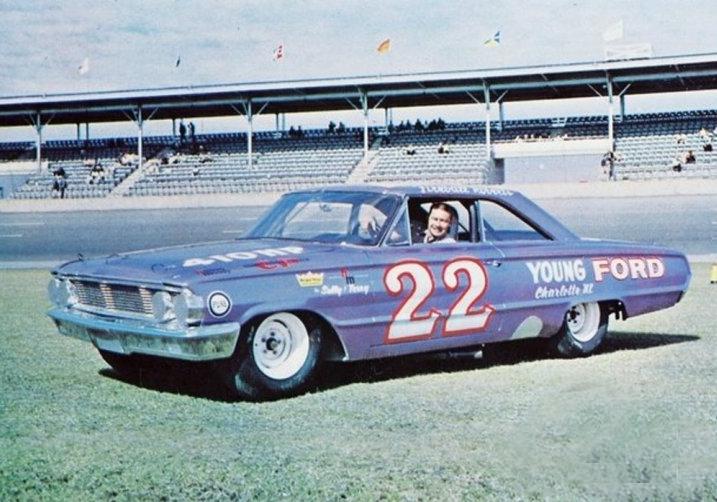 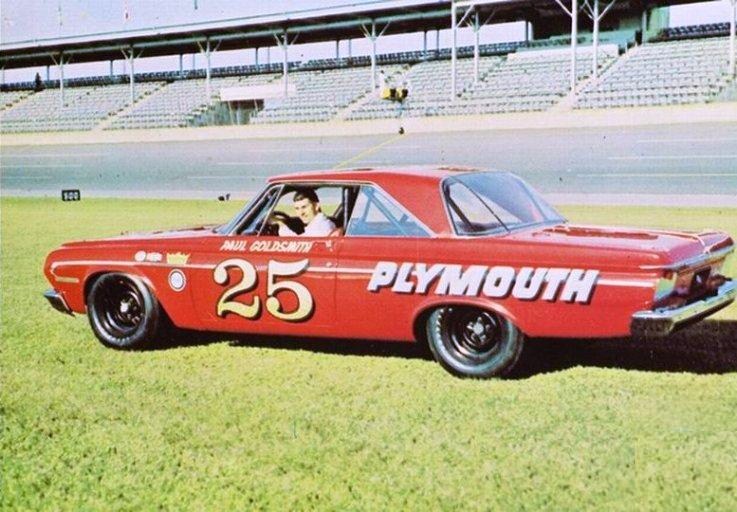 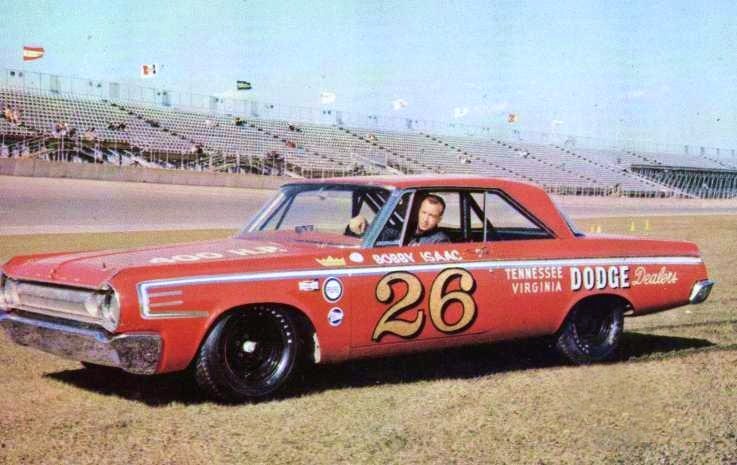 Race results of the two 100 mile races held on Feb 21st. Dave MacDonald finished 9th in race 1. These races determined the starting posi-
tions behind Petty & Goldsmith, who each won one of the two "50-mile pole position races" giving them the front two spots. 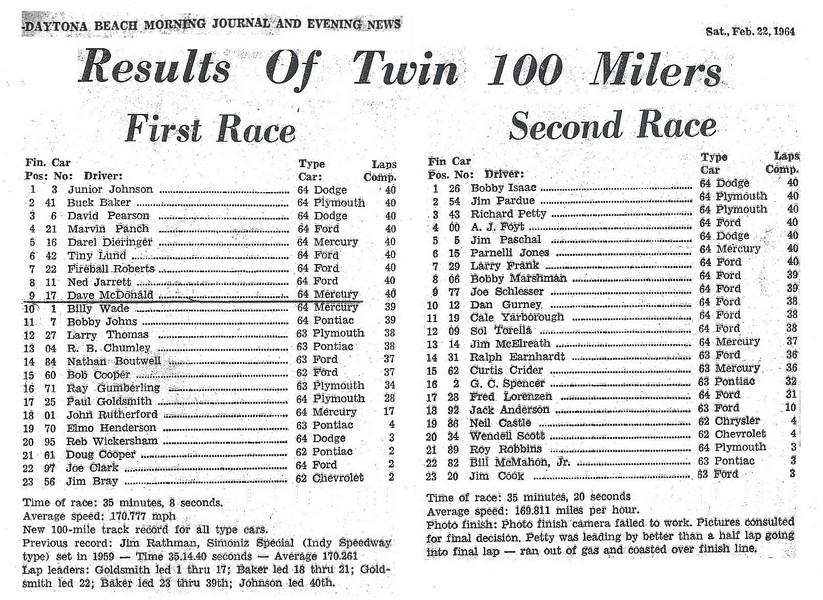 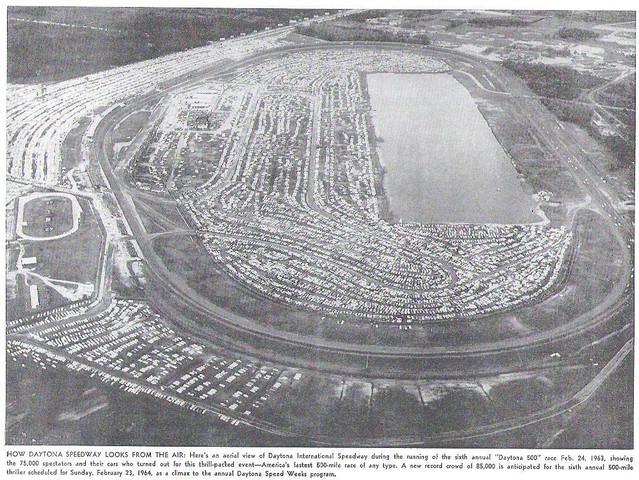 Mike Gammino, Ferrari driver and a good friend of Dave's, telegrams him a bit of good luck before the Daytona 500

Drivers get ready to pull their cars out to the track in front of 82,463 roaring fans. Dave MacDonald in #17 starts alongside his good
friend and Cobra running mate Dan Gurney (#12). In front of Dave is Ned Jarret (#11) and Fireball Roberts (#22). Look closely and you
see the "yellow rookie bumper" on Dave's car and Jo Schlesser's #77 car. Schlesser, a Formula One driver from France was killed in the
1968 French Grand Prix.

Another view more towards the front of the grid

Parade lap finished and the Daytona 500 about to go green (Dave started 19th). Unfortunately the parade lap is where Dave MacDonald
felt the sway bar break on his Mercury. After pitting the Stroppe crew determined that repairs could not be made and sent Dave back out.
He drove the entire 500 miles with the car in this condition. 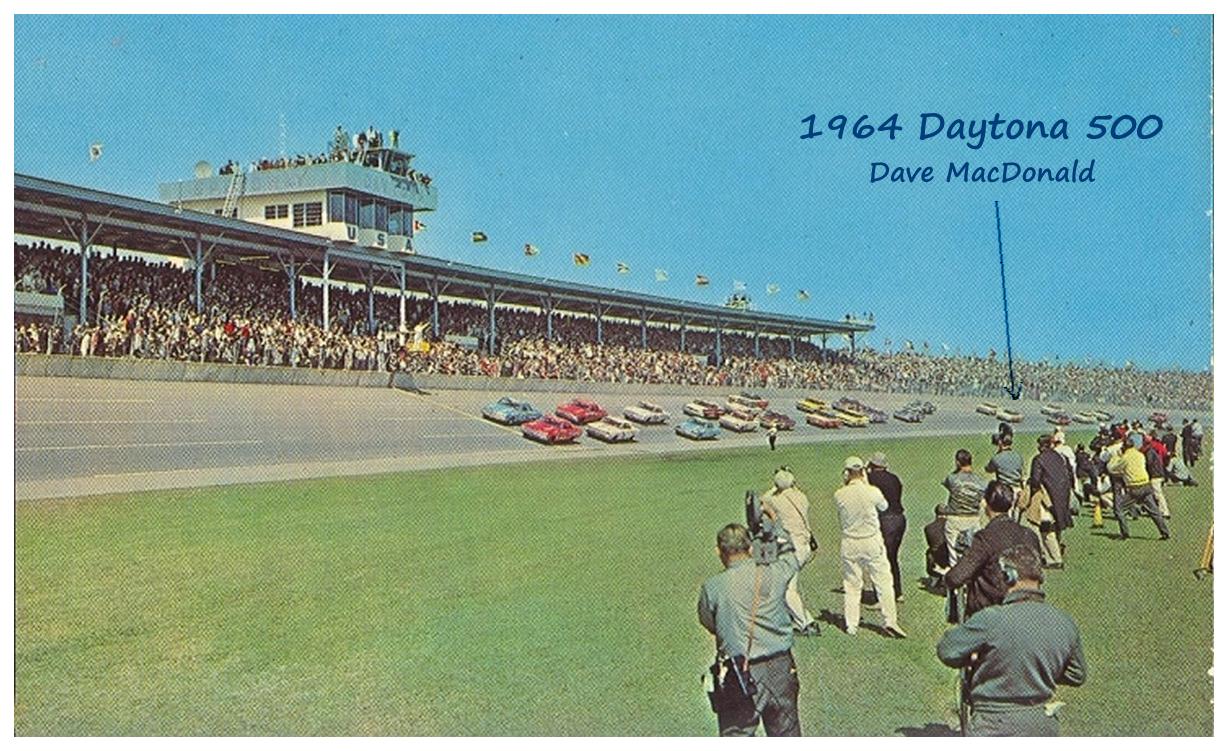 Daytona 500 field hits the first turn with debris all over the track. Dave MacDonald would later comment on the swirling trash at the start

Freddy Lorenzen takes a higher line and is just ahead of Larry Frank on lap 35. Lorenzen would drop out on lap 50 with engine troubles. 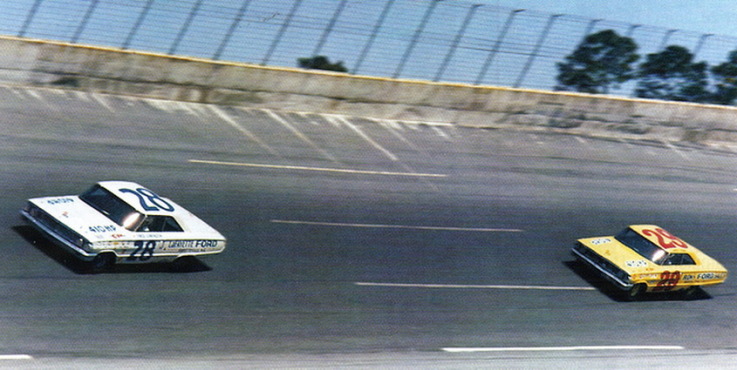 Johhny Rutherford, Jim McElreath & Ned Jarrett are involved in an accident on lap 106. All drivers were ok. 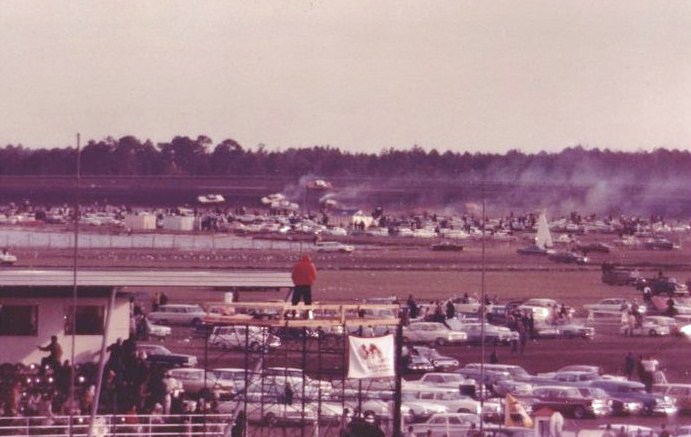 Johnny Rutherford's car goes belly up and slides down the track Johnny was OK. Reb Wickersham and Ralph Earnhardt running a strong race and both in the top 15 late Lap 125 and Dave MacDonald feeling good and running 7th in his Daytona 500 debut Lap 127 and USAC Champion AJ Foyt is out of the race. Versatile superstar driver Dan Gurney in for a pit stop Lap 175 and Bobby Issac still in the top 15 looking to move up

Just a few laps to go in the '64 Daytona 500 and Dave MacDonald has his Bill Stroppe Mercury running 10th. Photo Steve Zautke 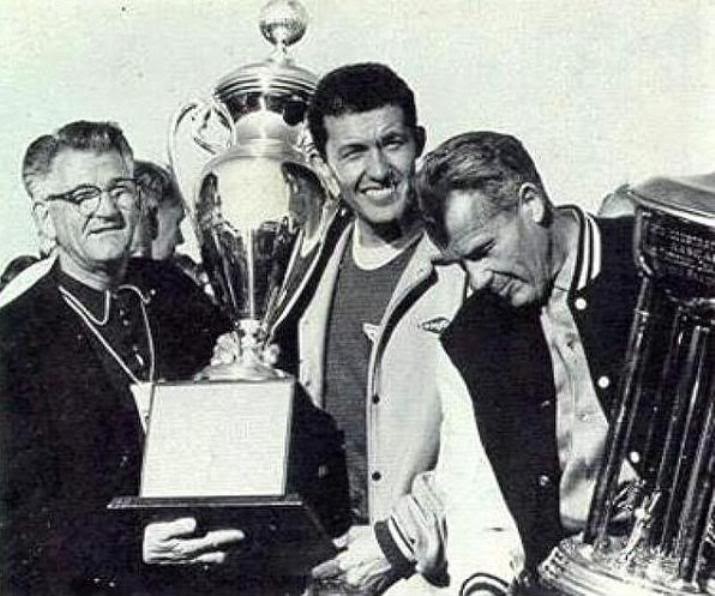 Results for the 1964 Daytona 500. Dave finished 10th in a Bill Stroppe Mercury. Video of this race is in Dave's racing video section 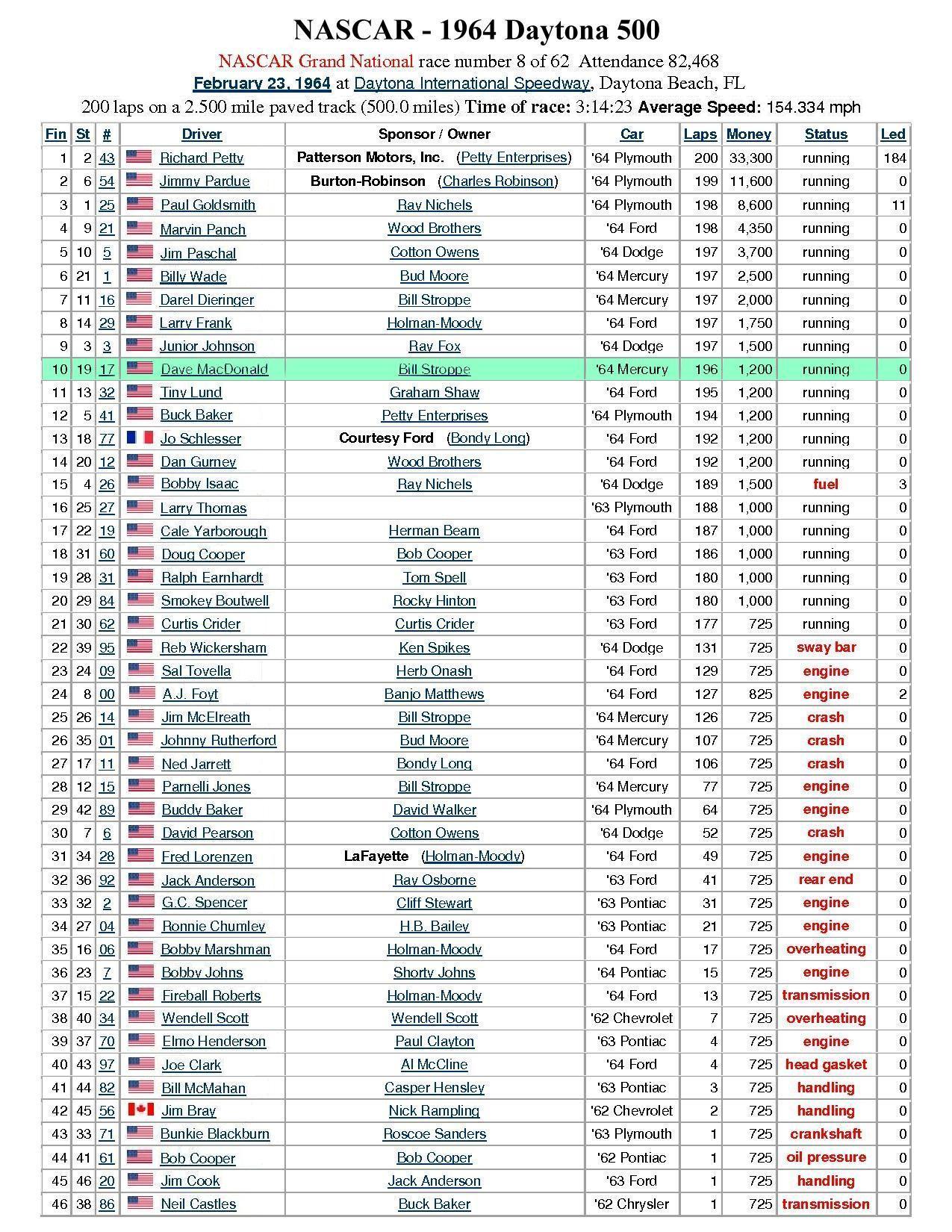 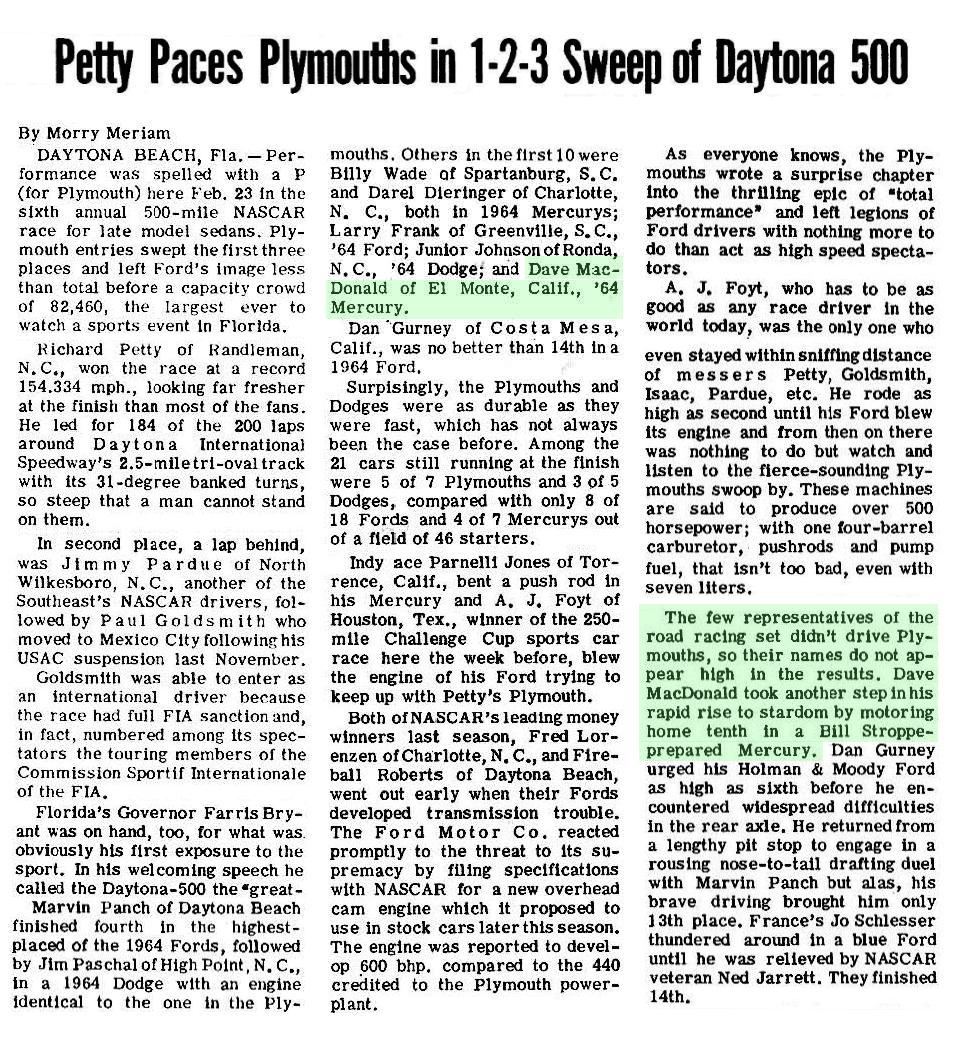 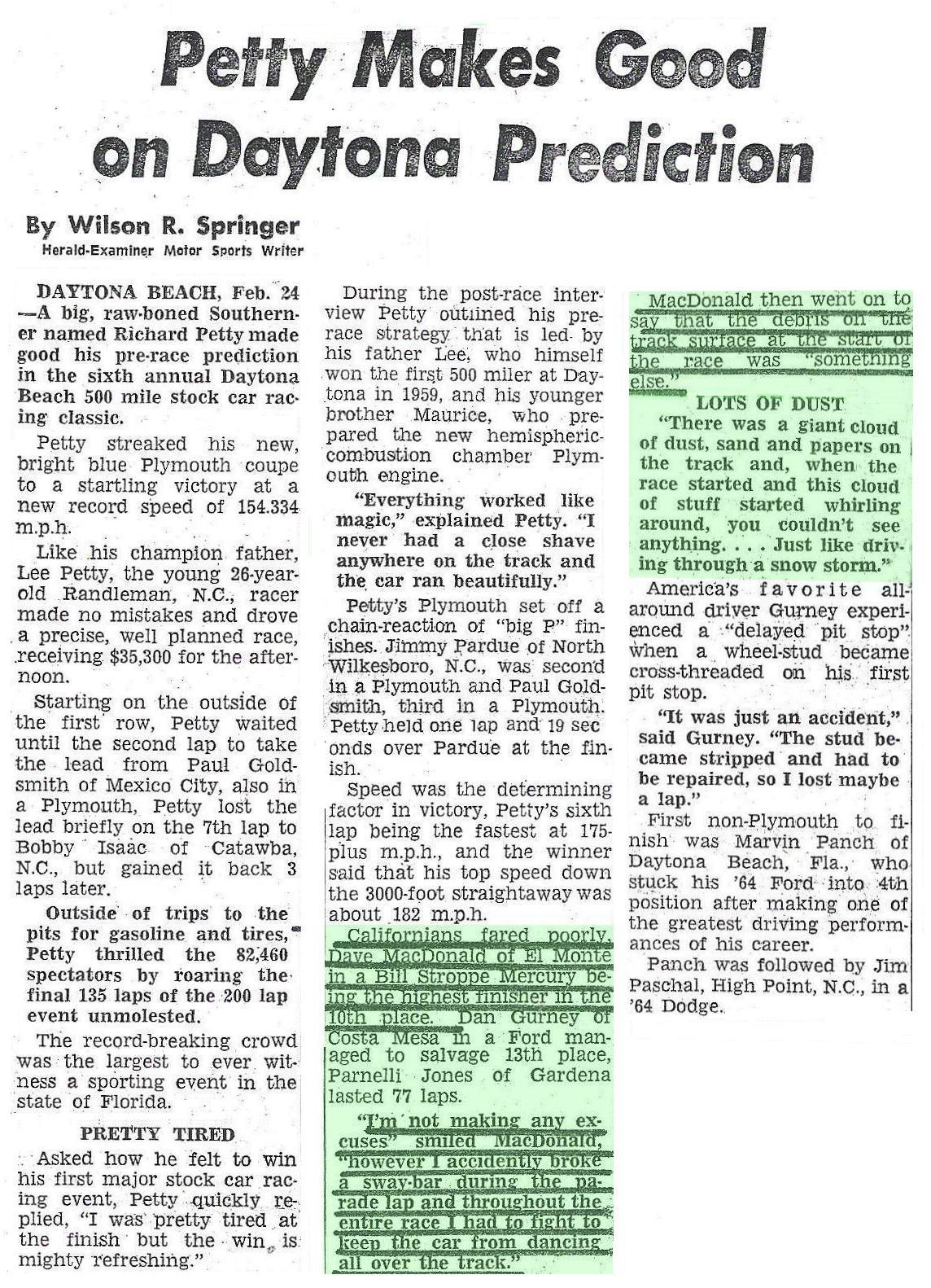 Dave MacDonald picked up 3,104 pts for finishing 10th & another 272 pts for placing 9th in the 100 miler. This put Dave 8th overall in the
NASCAR driver standings. Sports car champion MacDonald is surrounded by names that would turn out to be legends in NASCAR! 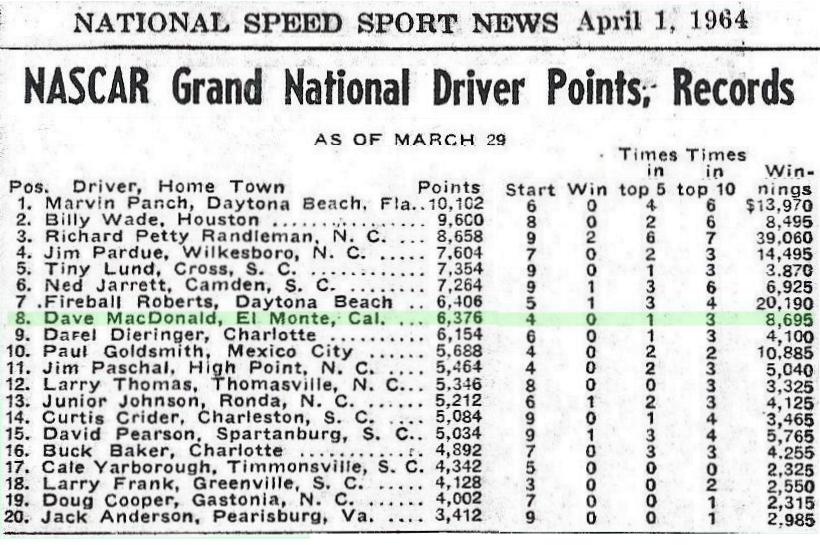 Dave's mileage check for the 1964 Daytona 500. Interesting that he was paid mileage since he flew to Daytona Dave MacDonald's wife Sherry accompanied Dave for this Daytona trip and they stayed at the Royal Beach Motel in Daytona Beach. 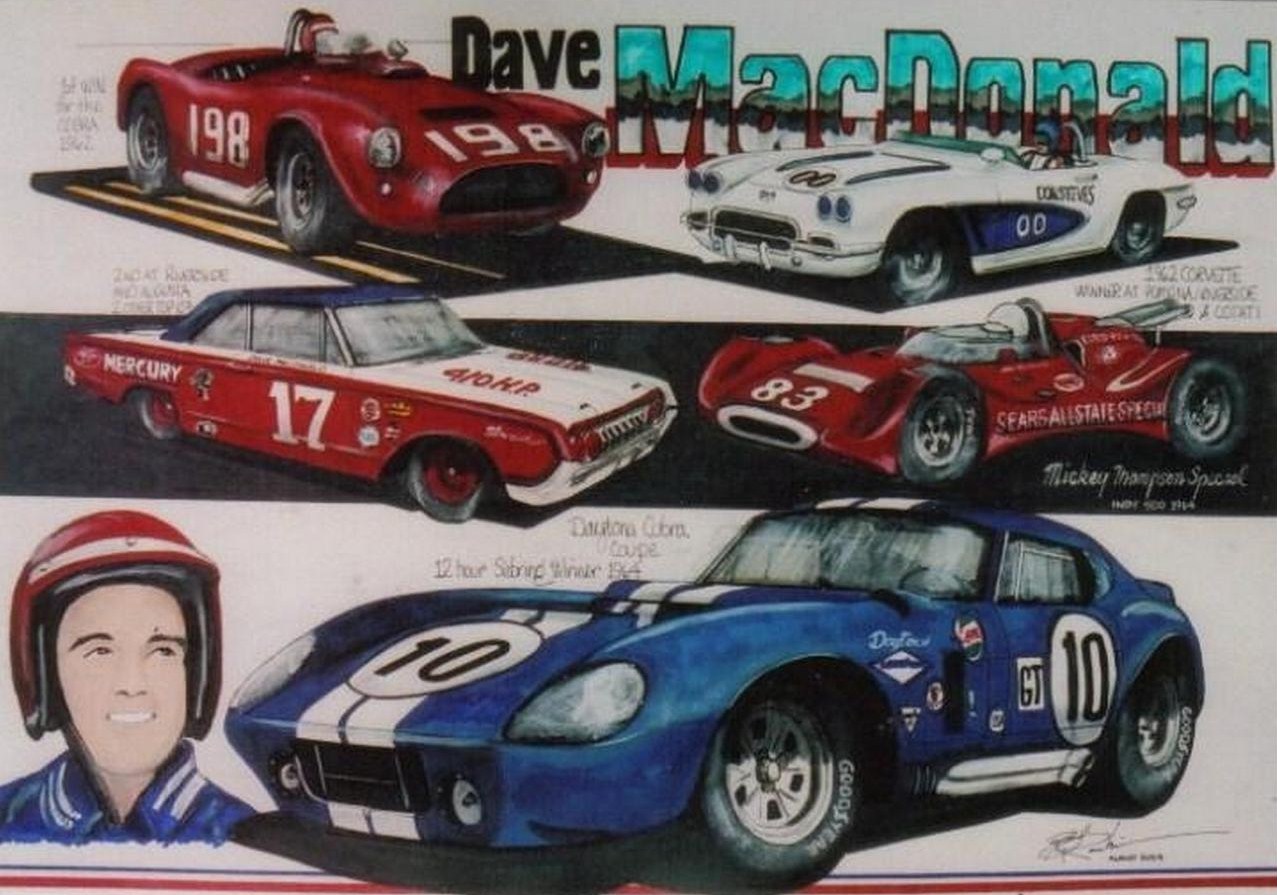