February 10-11, 1962 Riverside International Raceway - Dave MacDonald & the Corvette Special head to Riverside. The car
was still handling poorly at this time and the car was in ongoing development and prior to this race Dave and Jim took the car
over to master car builder Frank Kurtis for a little sorting out. Frank says he "Changed the setup so it would at least go around
a corner" Dave said he set it up to run like a production Corvette which was ok with him because he was used to that. 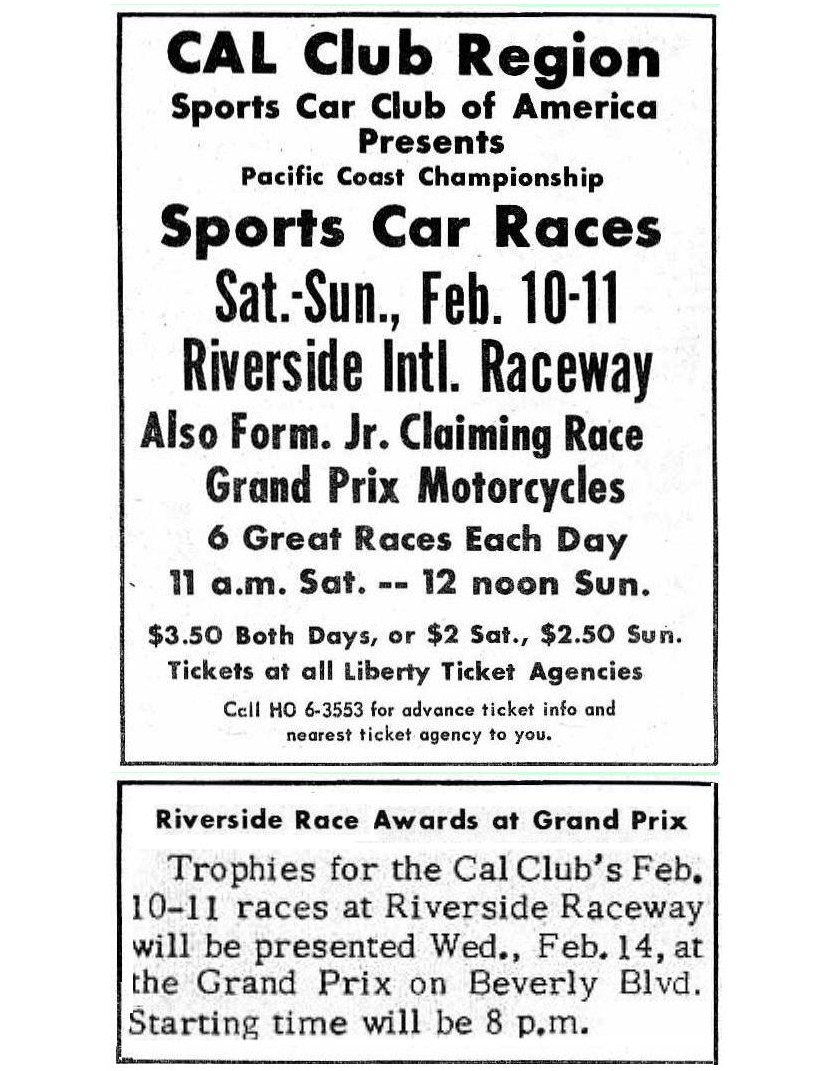 Riverside Raceway's 2.5 mile track layout for this SCCA sanctioned event. This photo is from Oct 1963 and you can see the
long course used to run NASCAR events. The big stockers were directed out of turn 6 and into a short chute and then over to
turn 8 (at the top of this photo). The back straight was extended and added a tenth mile to the overall length of the course

Dave took to a wet track Saturday morning (2/10) and won the prelim race in the modified class. Rain ultimately washed out
the afternoon sessions on Saturday and all of Sunday's (2/11) races and the event was cancelled. This was really unfortunate
for Dave as Daniels Chevrolet of Colorado Springs had offered him a ride at the Daytona 3hr Enduro - which was held the
same weekend as Riverside. Dave stayed loyal to his sponsor and friend Jim Simpson and declined the Daytona ride to run
here at Riverside. Photo Dave Friedman 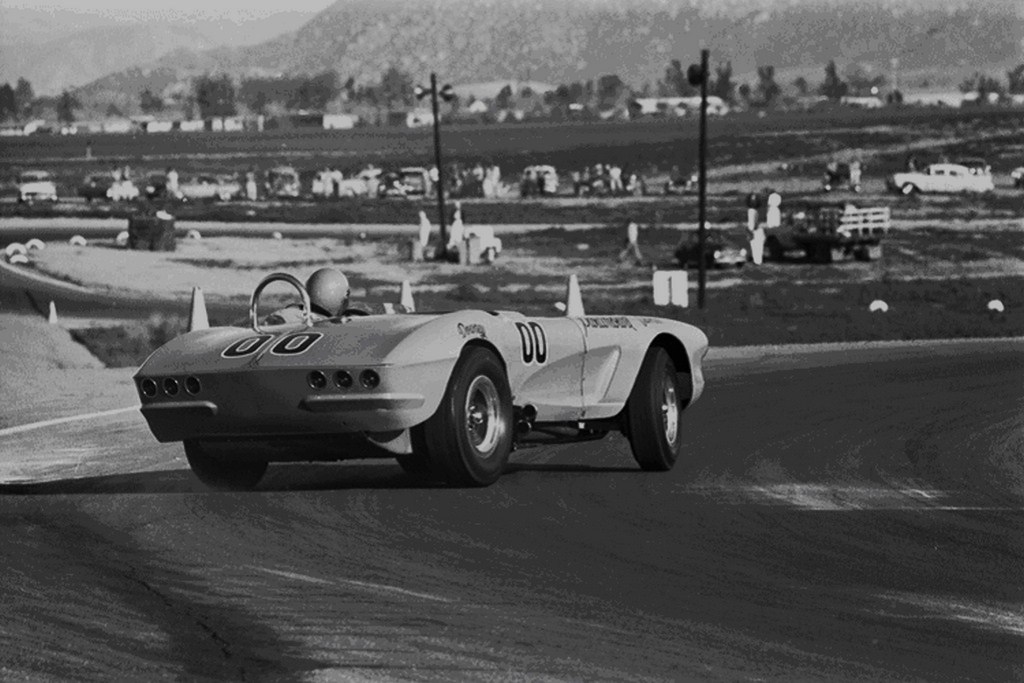 March 3-4, 1962 Riverside International Raceway - Dave MacDonald returns to Riverside to pit his one-of-a-kind lightweight
Corvette Special against a loaded field of modifieds. This was a reschedule of the rained out Feb 10-11, races. (Jim Simpson)

Dave MacDonald prepares to move the Corvette Special to the track for a Saturday morning practice session with a mix of
classes. Jim Simpson is behind the car.

This car was the collaborative creation of Dave MacDonald, Jim Simpson and Max Balchowsky and dubbed the Corvette
Special. They used a mold of Jim Simpson's stock '62 Vette and manufactured a two-piece 1/16 inch figerglass shell to place
over one of Max's custom built tube frame. The finished product was over 1000 lbs lighter, 17" shorter, 5" narrower and 4"
smaller in height than a stock Corvette ... it was a work of art. Below photo is from Saturday 3/3 and Dave prepares to move
the car to grid and battle a slew of Porsches, Maserati's, Ferrari's & Lotuses. Photo the MacDonald family 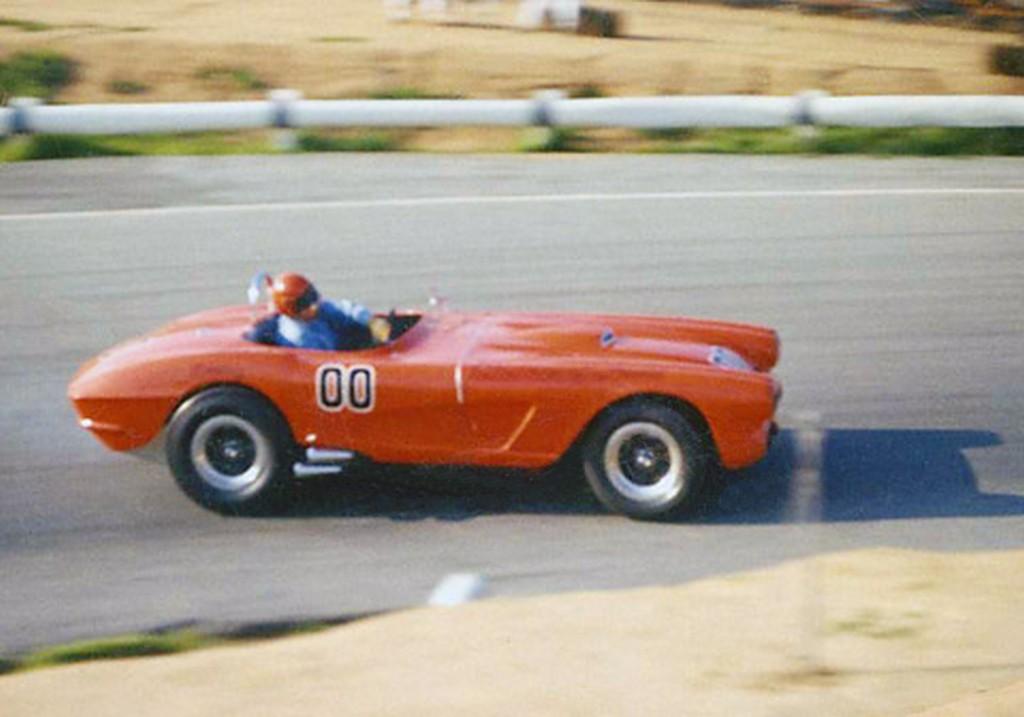 Same 3/3 race and MacDonald continues to increase the lead in his orange Corvette Special. Note: While it looks like Dave
is in a sweeping left hand turn he's actually in one of his full blown cross-lock righthanders! Photo Dave Friedman

Late in Saturday's (3/3) race Dave MacDonald drifts the Corvette Special through 9 and far out in front of the field. 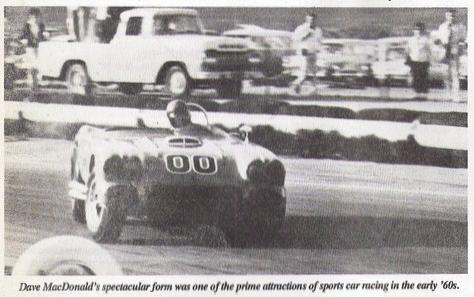 Dave MacDonald flat out on Riverside's back straight goes on to win Saturday's race. Zora Arkus Duntov, legendary "Father
of the Corvette" spoke with Dave many times about the Corvette Special, even coming to Dave's El Monte home one afternoon
to discuss the car. The Corvette Special may well have provided inspiration for Zora's lightweight 1963 Corvette Grand Sport.

The Corvette Special shown here after the Saturday March 3rd race. The car was designed not just for speed on the track but
in the pits as well. The entire front end was removeable for quick & easy mechanical adjustments. Photo John McCann.

On Sunday 3/4/62 Dave MacDonald and his Corvette Special engaged in a fierce race-long battle with Bob Harris. Below:
Bob jumped out to the early lead as his tiny car was ideally suited to the Riverside course. Photo Dave Friedman 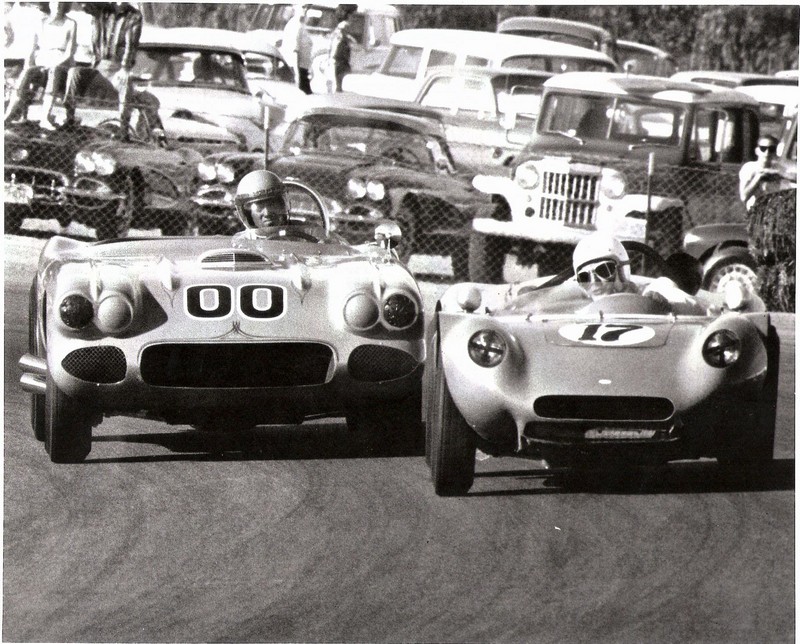 Sunday 3/4 race - On lap 3 MacDonald moves past Harris and drifts through turn 6 in the lead. Photo Dave Friedman

Sunday 3/4 - Harris tried mightily to catch MacDonald but on the final lap Bob's car gave out. 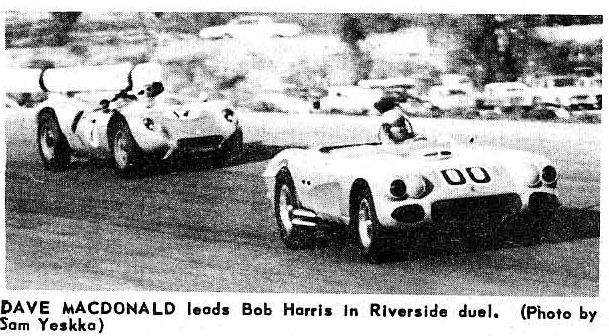 Dave MacDonald goes into turn 6 on the final lap

MacDonald blasts out of 6 and grabs the hard fought victory at Riverside. Jack Nethercutt in a Lotus MK19 finished 2nd and
McAfee 3rd in a Porsche. On Dave's cool down lap he picked up the stranded Harris and took him on the victory lap.

Dave celebrates with the family after sweeping the weekend races at Riverside International Raceway. Rare video of the
Sunday March 4th race can be seen "Dave's Racing Videos" section or on his YouTube page. 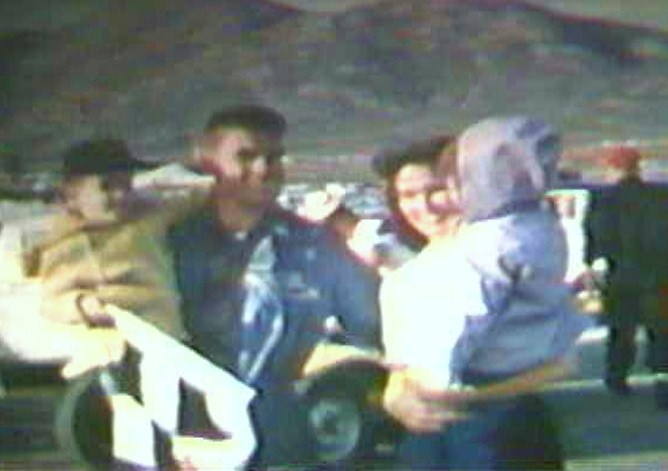 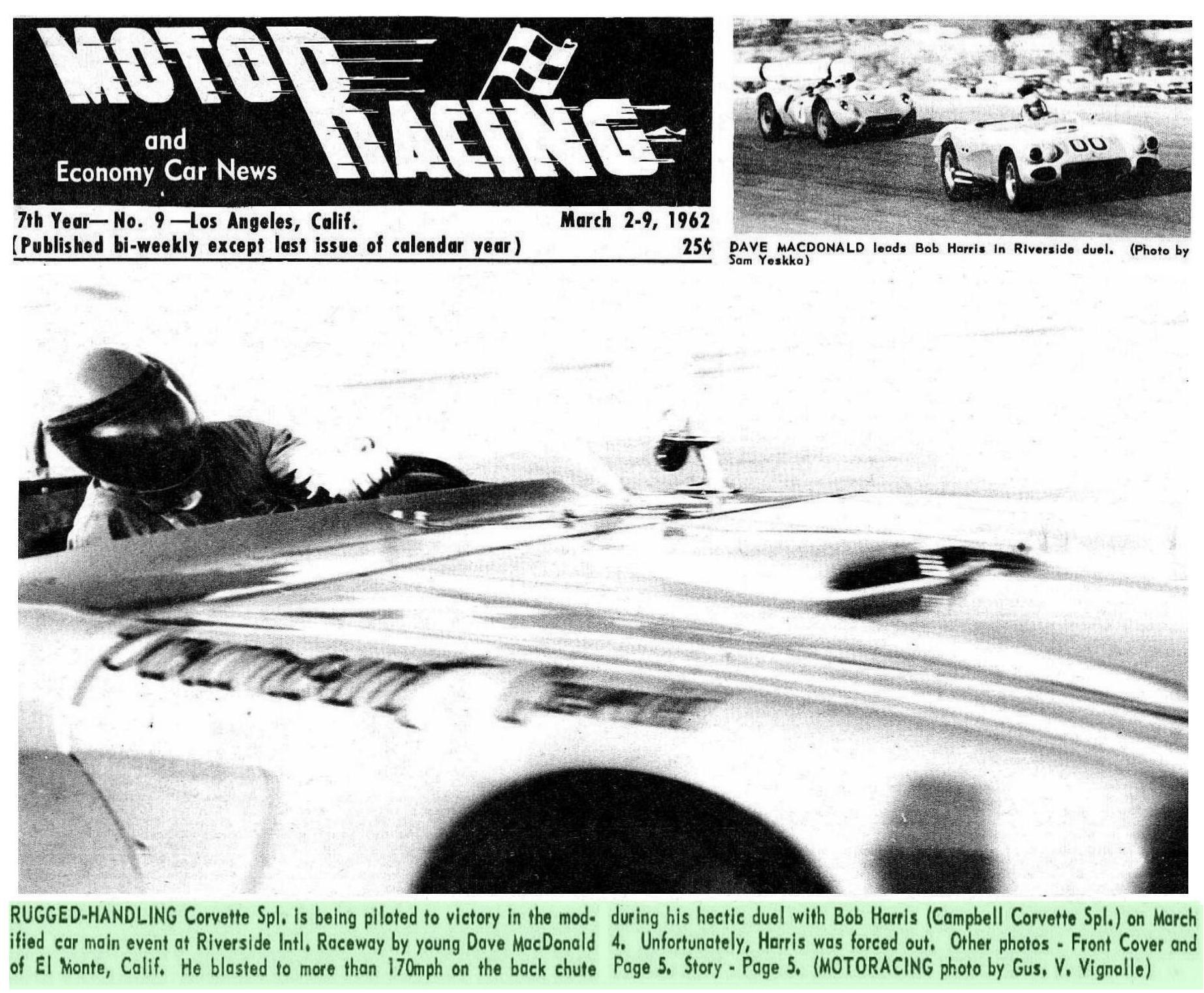 Interesting article about the great Bob Bondurant retiring right before this Riverside race. Of course Bob "unretired" and went
on to score many wins for Shelby in both the Cobra Roadster and Daytona Cobra Coupe.

Months after the MacDonald/Harris duel at Riverside, Bob was quoted in an article complimenting Dave's driving ability.